How prototypes influence the success of technology crowdfunding

When technology companies seek financial support via a crowdfunding platform, they have more success if their prototype is not yet final and can therefore still be changed. This is what BFH researcher Ferdinand Thies found out together with Michael Wessel from Copenhagen Business School and Alexander Benlian from Darmstadt University of Technology.

Young technology companies often have unclear prospects of success and therefore often have difficulty obtaining the capital they need via crowdfunding platforms. With a success rate of only about 20 % in the “technology” category, they have the lowest probability of success on the popular crowdfunding platform Kickstarter, for example. In order for new products to receive financial support, potential backers naturally want to know what for. A prototype helps companies demonstrate technological feasibility and mobilise the necessary resources. However, the effectiveness of prototypes depends on the development status, i.e. the extent to which the prototype already reflects the look and functionality of the final solution. This is referred to as “prototype fidelity”. Moderate prototype fidelity has been shown to be more effective for crowdfunding. Beyond a certain threshold, high fidelity can even be detrimental, as such prototypes present funders with a fait accompli and deprive them of the opportunity to contribute. Therefore, not only a promising product is important, but also the possibility for backers to participate in co-creation activities.

The three empirical studies show that prototype fidelity has a curvilinear (inverted U-shaped) relationship with project support. Increasing prototype fidelity leads to more supporters for a crowdfunding project until a peak, beyond which participation decreases again: 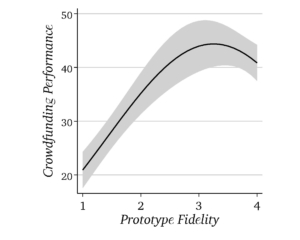 This relationship is further moderated by the make of the rewards offered and the quality of the prototype presentation. On the one hand, compared to physical products, digital products do not suffer from diminishing co-creation opportunities the more developed the product is, as software artefacts can always be updated or changed, even after the product has already been delivered. 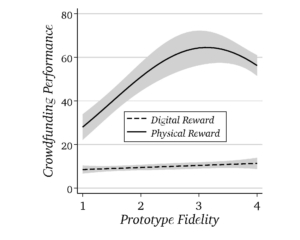 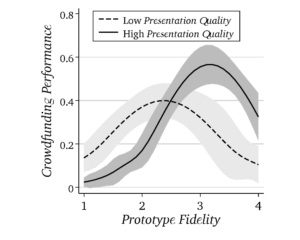 The findings contribute to the entrepreneurship literature by providing a more nuanced understanding of the relationship between new venture prototyping and the supportive behaviour of external stakeholders. The findings presented are particularly – but not exclusively – valuable for entrepreneurs seeking to raise funds for technology ventures via online crowdfunding. In particular, we find that an optimal level of prototype fidelity significantly increases the number of backers and can actually make the difference between funding and failure. However, if entrepreneurs present potential backers with a fait accompli and deprive them of the opportunity to co-create, this can undermine the community spirit of crowdfunding, as it is not only about the reward, but also an active co-creation that motivates participation in crowdfunding.

The full paper can be found here

Michael Wessel is a professor at the Institute for Digitalisation at Copenhagen Business School, Denmark. He holds a PhD in Business Informatics from Technische Universität Darmstadt, Germany. His research interests include digital entrepreneurship, crowdfunding and digital platforms.

Dr Ferdinand Thies is a research professor at the Institute of Digital Technology Management at BFH Wirtschaft. His research topics are platform economics, digital business models, crowdfunding and digital technologies. He received his doctorate from the Technical University of Darmstadt.

Alexander Benlian is a professor at the Technical University of Darmstadt, Germany. He holds a PhD from Ludwig-Maximilians-Universität Munich. His research interests include IT entrepreneurship, digital business models, human-computer interaction and algorithmic management.