The Swissdec architecture sketches show how corporate processes communicate with insurers and authorities today. An attempt is made to explain some essential concepts of this architecture and to outline future developments. The central data exchange platform of Swissdec Distributor is used to optimise and automate processes between about 200,000 companies and their insurers & authorities in Switzerland. Currently (2018), more than 17.8 million personal data with their wages are distributed between the participants annually.

The process participants are:

The use of the Swissdec Distributor has the following advantages:

The technical architecture is based on cascaded web services that establish a synchronous call from the transmitter (ERP system) via the distributor to the end recipient (insurer & authorities). In this way, a “real-time” connection is established via the distributor, which allows a time-critical interaction of systems in the M2M process. In addition to the secure channel at transport level (SSL/TLS), the web services are secured by the standardised security concepts of WSS (Web Services Security; SOAP Message Security: signature+encryption). 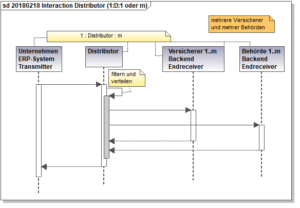 Other parts are organised like a “construction kit” and are used in different contexts. Two of them – which also concern the area of data security – we only want to mention briefly here.

Already the computer scientist Melvin E. Conway showed with “Conway’s Law”, named after him, how organisations influence system structures. Swissdec only provides a technical standard and the distributor. The actual system parts are developed in the ERP and back-end systems. For this reason, the procedure for Swissdec is also an important aspect. The methodology for developing a Swissdec standard does not correspond to a classic application development. Very different participant requirements must be standardised so that in the end interoperability functions on the distributor by means of plug & play of the processes. 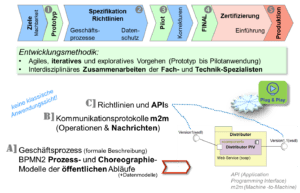 A] The process is divided into “public” and “private” parts.

B] Communication can now be derived from this and a protocol developed. C] Everything is then specified in a Swissdec standard. These guidelines describe the functional and technical part of the process. The Application Programming Interface (API) is available as Web Services Description Language (WSDL) with XML Schema (XSD). Frameworks can be used to generate code for different platforms. Integration into one’s own application can then be programmed “seamlessly”.

Anton Böhm is the owner of itServe AG and heads Swissdec's technology department.