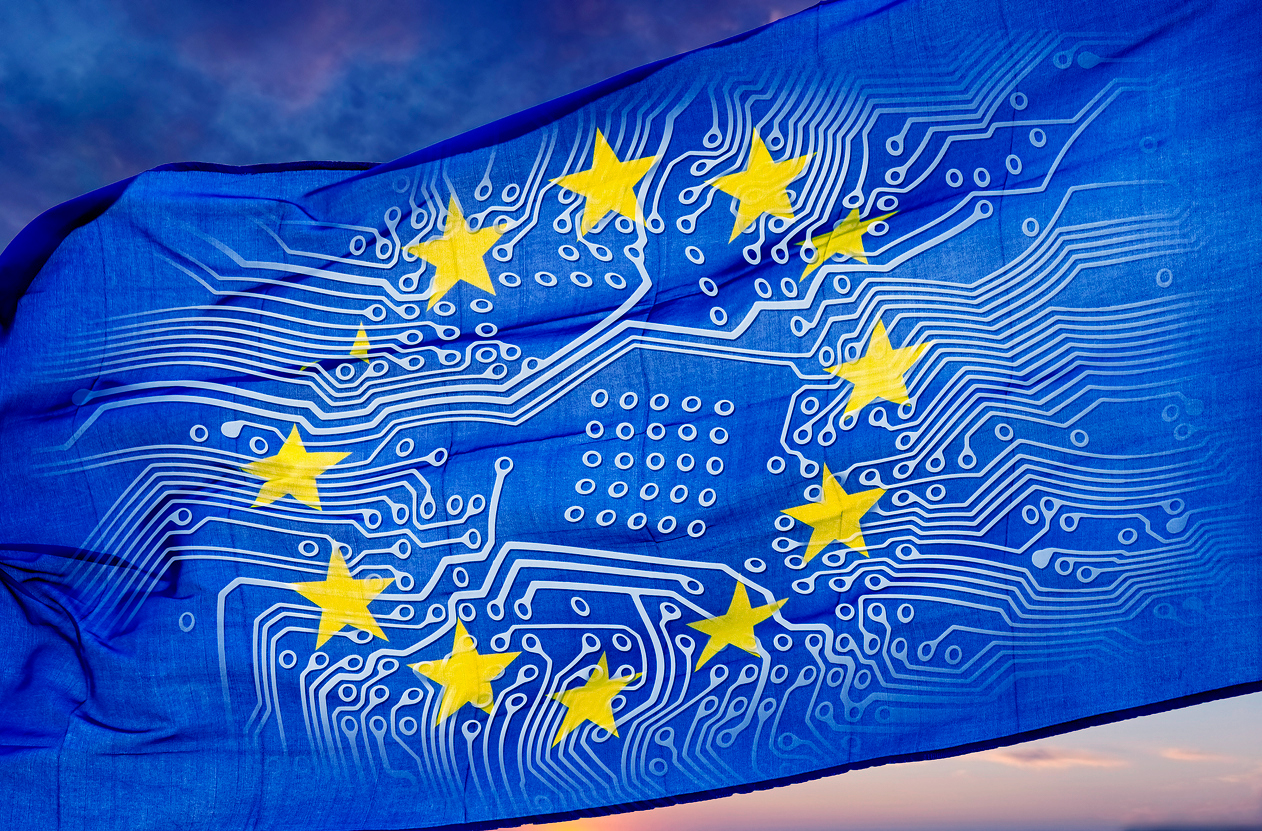 A comparison of the eID systems in France, Belgium, Poland and Estonia shows the importance of country-specific path dependences and a good fit between the eID system and national administrative systems.

Poland and Estonia both have a post-Soviet historical context, France and Belgium share a Napoleonic administrative historical context. Estonia and Belgium have a high level of eGovernment development while Poland and France have a low one (European Commission, 2020a). Thereby, the case selection strategy may help elucidate how historical dependencies may affect the policy outcomes regarding eID Management Systems (eIDMS). What is the role of path dependence in the development of eIDMS in Europe?

Our paper adds fresh evidence to Kubicek’s eIDMS path dependence model (2010) and connects it to administrative system typologies (Kuhlmann & Wollmann, 2019, pp. 71-137). It confirmed the research hypothesis H1: “The features of the eIDMS in 2020 are not a response to current conditions. The interaction of organisational, technological and regulatory paths explains the features of the eIDMS in 2020.”

Shaped by the Prussian state tradition and subjected to the Stalinist state organisation model (Kuhlmann & Wollmann, 2019, p. 22), the Polish public administration after 1989 “saw a chaotic implementation [of] contradictory management paradigms” (Mazur et al., 2018), leading to “a general discrepancy between legislative intent and administrative practices” (Meyer-Sahling & Yesilkagit, 2011). After a delayed state register reorganisation (Ministry of Interior and Administration, 2008), a plan in 2007 set out to create an interoperable eIDMS by 2013 (Rada Ministrów, 2007), with a project value of PLN470 million (€133 m), 85% of which would come from the European Regional Development Fund. The eIDMS, as 23 out of 28 eAdministration projects, was not functional by its due date in 2011 (Nadybski, 2013). In 2014, close to technical completion, it was halted by a committee due to legal concerns (Majewski, 2019). In 2015 national law was aligned to the eIDAS Regulation. After a threat of having to repay EU funding if the eIDMS was not operational, the new e-Dowód Project planned to rollout eIDs by 2019 (Kudaj & Malik, 2017) and was developed exclusively in the public sector. The Ministry of Interior led the project, co-led by the Ministry of Digitalization after 2015. A government agency technically implemented the eIDMS which cost 27.1 million zł (e-Dowód – kontynuacja projektu pl.ID i realizacja powiązanych projektów, 2018). For the Civic Platform party (and later for Civic Platform – Polish People’s Party coalition) the project was a failure. For the incumbent Law and Justice it was a success as it was finalised under its rule (Prawo I Sprawiedliwośc, 2019).

The current actor constellation (see Figure 2) shows that the distribution of power between public and private actors is equisized. Most central to the actor network is the private institution SK ID Solutions that manages the eID products. 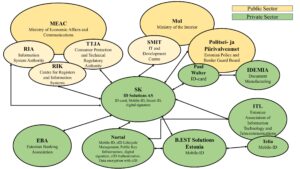 The digitalisation of the national identity document, created in 1955, continually encountered major obstacles (Boucher, 1974). In 2005 and in 2012, two pieces of legislation were rejected due to data protection concerns (Piazza, 2001; Constitutional Council, n°2012-652). In 2016, the Secured Electronic Titles file (Decree October 28, 2016) was similarly legally contested but remained in force. A part of the project (Interior Ministry, 2015) survived and gave birth to the non-eIDAS-compliant FranceConnect platform in 2016 (FranceConnect, 2020).

The unique history of contested digital identity has led to a low trust culture regarding uses of personal data (Digital Identity Information Report, 2020), being the principal obstacle to internet use for 40% of the French population (Digital Market Barometer, 2018) and hindering eGovernment reform (Mission d’information commune, 2020).

Belgium developed its eIDMS in 2010 (Kubicek & Noack, 2010) towards a new eIDMS in 2020 (RRN, 2020d; SPF Chancellerie, 2018) mostly by overhauling its infrastructure (RRN, 2018). The people governing the eIDMS changed over the years, lessening the original academic influence (cf. Hermans & Peeters, 2019; Kubicek & Noack, 2010; Cock, 2017). Given its legalistic, durable and highly trusted public administration (OECD, 2005, p. 7; Hansen et al., 2013; Ongaro et al., 2017), the eIDMS is firmly rooted in the National Registry that is subordinate to the Federal Public Service (FPS) Interior Affairs while being implemented by private contractors (RRN, 2020c). The municipalities are involved in the roll-out of identity documents (RRN, 2020a) for Belgians and foreigners, adults and children. The eIDMS is affordable (RRN, 2020e), relying on mainstream technologies (SopraSteria, 2019) and Belgian funding only.

All in all, the eIDMS model (Kubicek, 2010) was validated because the comparison of cases confirmed the research hypothesis (H1). Indeed, the features of the studied eIDMS in 2020 are not a response to current conditions. The interaction of organisational, technological and regulatory paths explains the features of the eIDMS in 2020. All eIDMS offer authentication and e-signatures with a high assurance level, however, they are dissimilar regarding their date of implementation, politics, funding, rival identification products and leading institutions. This indicates a role for country-specific structures resulting in different eIDMS outcomes, having an effect through country-specific path dependencies. Thereby, each country context influenced the strategic actions towards establishing an eIDMS.

Where strategic actions were ill-fitted to the country context, the eIDMS paths showed frequent interruptions, i.e. French digital identity laws or the Polish focus on alignment with the EU not sufficiently taking into account its often disorderly administrative historical context. Where strategic actions were well-fitted to the country context, the paths were continuous and showed little interruption, i.e. Belgium’s neo-Weberian approach (Byrkjeflot et al., 2018) to control the eIDMS through centralised technology exploitation and strict codification or Estonia’s parallel reconstruction (Bouckaert et al., 2009) of public administration and its eGovernment.

All references to this study can be found here.

Thomas Balbach is a graduate student of the Master of Science in Public Sector Innovation and eGovernance at KU Leuven, WWU Münster and TalTech. After his undergraduate studies in political science at FU Berlin and University College London, he worked as a Business Analyst on several eGovernment projects compliant with European and international frameworks.

Lilly Schmidt is a graduate student of the Master of Science in Public Sector Innovation and eGovernance. Alongside her fellow students she has spent a semester at KU Leuven, diving into topics like eID, Cross-Border Public Services, and SDG. She will continue her studies at WWU Münster which will focus on project management and enterprise architecture. Additionally to her studies, she is a working student at a public sector consulting firm in Berlin.

Yuliia Kravchenko graduated with a Master of Science in Public Sector Innovation and eGovernance (KU Leuven, WWU Münster and TalTech). Prior to that she obtained an undergraduate degree in International Relations and Area Studies (Jagiellonian University) and Law (Odesa Law University). Currently, she has an internship position at the Centre of Policy and Legal Reform (Ukraine) doing research on administrative reforms in Ukraine.

Juliette Dumas is a graduate student of Master of Science in Public Sector Innovation and eGovernance at KU Leuven, WWU Münster and TalTech. She previously obtained a master's degree in European law (Panthéon Assas Paris II) and a study certificate in international relations (IHEI). She developed her interest in eGovernment issues during her internship as policy analyst at FranceDigitale, a leading startup organization in Europe.