How IT in pharmacogenetics helps to increase drug safety

The European Commission estimates that 197,000 patients die each year from adverse drug reactions. This is partly due to differences in genetic make-up – what works well for Mr Brönnimann misses its target for Mrs Brönnimann or can lead to side effects. This influence can already be examined before the medication is administered, and an application from the Institute for Medical Informatics at the Bern University of Applied Sciences supports this important process Pharmacogenetics (often also called pharmacogenomics/PGx) investigates the connection between a patient’s gene variations and his or her metabolisation of drugs. This knowledge makes it possible to prevent adverse drug reactions (ADRs) in patients with certain gene variations. Currently, the Clinical Pharmacogenetics Implementation Consortium (CPIC) has guidelines for 43 active ingredients [1], and the FDA now lists more than 260 active ingredients with pharmacogenetic biomarkers in the package insert [2]. Both the guidelines and the biomarkers are still rarely taken into account when prescribing and dispensing drugs. Yet ADRs cause avoidable suffering and high costs in the health care system. The EU writes on adverse drug reactions (ADRs):

It is estimated that 197,000 deaths per year in the EU are caused by ADRs and that the total cost to society of ADRs in the EU is €79 billion. Today’s proposals are aimed at further improving the current system. They will save many lives per year across the EU. In addition, they will help to cut red tape by decreasing the administrative burden by ca .€ 145 billion p.a. – European Commission, 2008

[3] In the Swiss health care system, there is a lack of both incentives and efficient and user-friendly IT processes for exploiting the potential of pharmacogenetic markers.

How is pharmacogenetics practised today?

Pharmacogenetics is now an established field and the Pharmacogenomics Knowledge Base (PharmGKB) will soon celebrate its 20th birthday. Pharmacogenetic interaction checks have been available for some time and have become increasingly affordable in recent years. These are offered in Switzerland by some companies and usually support one of two generally describable workflows. In the first workflow, a laboratory sample taken from the patient is sent to the company’s own or a partner laboratory, where the sample is analysed. A report is then generated from the laboratory data and sent either to the patient or to the healthcare provider. The usual way of transport is still by post, although some providers also offer digital dispatch via PDF file. The patients themselves must ensure that their pharmacy and treating physicians receive the pharmacogenetic file. Reports that are difficult for non-specialists to understand sometimes require additional consultation with specialists. Some companies on the market have specialised in producing reports from the laboratory data that are as comprehensible as possible, so that this additional consultation can be saved. In the second workflow, there is a web portal that can be used to create lab orders and retrieve the corresponding analysis reports. Instead of sending a report to the patient or the ordering doctor after the laboratory analysis and the resulting report, the patients receive a digital key with which they can allow their pharmacy or their treating doctors to access the pharmacogenetic data in the web portal. For patients, access to the report is easier to manage than in the first variant.

Why has pharmacogenetics, despite its high relevance and existing providers, not yet made much headway in practice?

One factor for the lack of consideration in the treatment context is the rather small number of studies on WZW evidence (efficacy, appropriateness, cost-effectiveness) in the application of pharmacogenetic guideline information. Therefore, many professional societies still refrain from including pharmacogenetic interaction checks in their own guidelines. However, it can be assumed that this will happen sooner or later. A few pharmacological interaction tests may already be ordered by physicians of all specialities and billed via the health insurance fund. Nevertheless, even these tests are often not used when there is an indication. This suggests that there are further obstacles, for example the expense involved. As indicated above, there is a lack of integrative IT services for the processing and comprehensible presentation of pharmacogenetic knowledge. As a result, an efficient implementation and smooth integration of pharmacogenetic processes into existing processes is often difficult to realise.

A solution for the future

The Institute for Medical Informatics at the Bern University of Applied Sciences has developed an application that seamlessly integrates into the work processes of the involved actors via standardised interfaces (keyword: HL7 FHIR) and takes the diversity of processes into account. The different services of this application can either be used via a web portal or integrated into third-party software, for example, into a practice information system or pharmacy information system. The application knows three process scenarios:

The initial process concerns the first-time performance of a pharmacogenetic interaction check. Figure 1 shows a generic process, to which variations exist in the application in order to do justice to the different contexts. 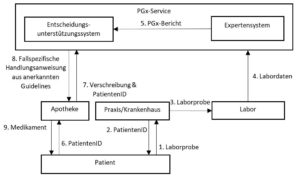 This process can be illustrated by the example patient Mrs. Brönnimann, who suffers from depression and has been prescribed Escitalopram by her psychiatrist Dr. Baumgartner. To make sure that Ms Brönnimann does not have to wait longer than necessary for convalescence, Dr Baumgartner suggests to Ms Brönnimann that a pharmacogenetic interaction check be carried out.

Thanks to the pharmacogenetic interaction check, it was thus possible to prevent Ms Brönnimann from taking a drug that is highly unlikely to work for her and therefore potentially only produces side effects. Three years later, the depression half forgotten, Mrs Brönnimann comes to the pharmacy again to order her new cardiovascular drug. Since the necessary data are already available, the decision support system can be triggered automatically before dispensing; it does not detect any increased risk. A classic pharmacogenetic report can also be obtained from the PGx system at any time.

In addition to WZW studies on pharmacogenetics, more implementation studies are needed to show how the results of pharmacogenetic research can be made available to the population efficiently. It must be possible for practice/pharmacy/hospital software manufacturers to integrate pharmacogenetic guidelines and the necessary additional processes into their systems with reasonable effort. It should not fail because of IT to treat patients better.

Kevin Tippenhauer is a medical informatics specialist FH and has been working as a research assistant for medical informatics at Bern University of Applied Sciences (BFH) since 2013. As part of the First Ventures project "Pharmacogenetic Decision Support" funded by the Gebert Rüf Foundation, Kevin Tippenhauer is working on simplifying the processes for pharmacogenetic interaction checks through IT support.

Murat Sariyar holds a PhD in Mathematics and has been Professor of Medical Informatics at Bern University of Applied Sciences (BFH) since 2016. His areas of expertise include personalized medicine, machine learning, statistical bioinformatics and data protection.