Data as an innovation driver of the smart city

Data has already been called the “oil of the 21st century”. But data will also form the basis for many processes in the intelligent city of the future – the smart city. This will require a platform in which data from a wide variety of sources – sensors and the Internet of Things, open data, government data, data from social media and other third-party providers – can be processed, linked and analysed to extract valuable information and make it available as Linked Open Data. Based on this, both cities and private providers can offer new-value applications and services; the platform thus becomes a location factor and an innovation driver. With increasing digitalisation, society is facing new challenges. At the same time, increased urbanisation is taking place. The societal challenges thus manifest themselves most clearly in the city: densification, public transport, efficient use of resources such as energy and water, security, and – central to the city dweller – improvement of the quality of life. It is therefore worthwhile to address the societal challenges in the urban environment first; a recent OECD study (OECD, 2015) also refers to “cities as hubs for data-driven innovation”. A research project coordinated by the BFH called “City Platform as a Service – Integrated and Open”, or CPaaS.io for short, was launched in July 2016. The project is a collaboration between partners from Europe and Japan and is funded under Horizon 2020 and by the Japanese NICT. It aims to build a cloud-based platform for cities and urban regions that will provide the basis for urban data infrastructure and innovation. The need for such a platform is supported e.g. by a study (Vega-Gorgojo et al., 2015): The study emphasises that “the city will need platforms that support digitalisation and the use of data, culminating in Big Data”, and that “the smart city must work with platforms on which data can be analysed and shared with other sources” 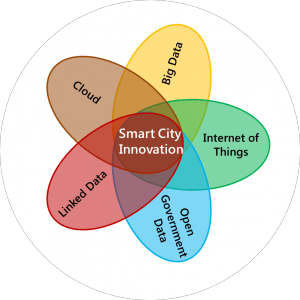 The goal of an innovation platform is ambitious. It is not just about realising a technical platform, or connecting complementary technologies such as the Internet of Things, Big Data and Cloud. Other projects do that too. Smart City Innovation means that the platform, or new applications and services based on the platform, provide real added value for society and for the actors in the city – residents, visitors, private companies and the public administration. To achieve this, the platform must be open, both in terms of the integration of other data sources and the access of third parties to the data (keyword: open data), naturally in compliance with data protection. In the urban environment, the integration of open public authority data is of particular interest. The project benefits from the fact that more and more authorities are following this trend and publishing their data on open data portals – in Switzerland, for example, on opendata.swiss, but the city of Zurich is also one of the pioneers in this field. CPaaS.io will go one step further here and also make the relevant data available as Linked Data. This means that the data is semantically annotated and also provided with metadata, e.g. on the provenance and quality of the data. Only this enables a simplified machine integration and use of the data in further applications. This can be used during large events, for example: In which direction do streams of visitors move? How has public transport been adapted to the current situation? How is the system reacting to dangerous situations, accidents, weather conditions, etc.? In order to identify beneficial applications for society, to implement them in the project, and thus to be able to validate the benefits of the platform, the involvement of cities is of central importance. To this end, the project has been able to initiate cooperation with several cities that already have experience in the areas of Open Data or Smart City. In Europe, these are Amsterdam, Murcia and Zurich, and in Japan Sapporo, Yokosuka and Tokyo. Field trials are planned in several of these cities. We are convinced that the longer we have more and more data, the more important it becomes to be able to master the social and economic challenges. Based on data infrastructures like the ones CPaaS.io will deliver, new applications and services will be offered and transparency will be increased. And for cities, this will become an important location factor, because innovative companies will prefer to settle where such platforms are available that they can use to provide their services.

The project is funded by the European Union’s Horizon 2020 Research and Innovation Programme (Grant Agreement n° 723076) and NICT in Japan (Management Number 18302).