Do citizens’ councils bring a democracy update for cantons and communes?

In many countries, participatory and deliberative approaches have been used in recent years to increase the direct involvement of citizens in political decision-making processes. Apart from a few pilot projects, Switzerland is still largely outside this trend. In this paper, two examples are given to illustrate how such approaches could complement existing democratic institutions at the cantonal and local levels.

For some years now, it has become clear that modern democracies are in crisis. On the one hand, the number of democracies worldwide has been steadily decreasing since 2005. More and more countries are sliding into authoritarian regimes or even dictatorships. On the other hand, even the established, “old” democracies are increasingly showing signs of wear and tear, such as stagnating or declining voter turnout, a growing loss of trust among citizens in the government, parliament and parties, or rampant polarisation.

As a response to this development, often referred to as “democratic backsliding” or “democractic recession”, new participatory and deliberative approaches are increasingly used to involve citizens directly in political decision-making (see this blog post). One of the best-known examples is the Irish “Citizen Assemblies”. These are committees of up to 100 randomly selected citizens who, instead of parliament, are commissioned to develop proposals for solutions to certain social challenges, which are then presented to the electorate in referendums. In Ireland, for example, legal regulations for abortion or same-sex marriage were introduced in this way.

In addition to this form of citizen participation, there is an almost unmanageable number of similar procedures in use worldwide (for an introduction, see OECD or buergerrat.de). This article focuses on a still rather rare form of citizen participation: the so-called “Citizen Councils”. These are similar to the Irish “Citizen Assemblies”, but in contrast to them, they are not only supposed to make decisions on a certain topic and then be dissolved, but rather as permanent institutions – comparable to a second chamber of parliament – to complement the existing democratic instruments of democracy.

How such a deliberative approach in the form of a permanent citizens’ council as a “second chamber of parliament” could be inserted into the existing democratic institutions of a canton is shown in Figure 1 using the example of the canton of Basel-Stadt. 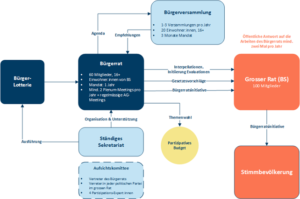 Figure 1: Embedding a permanent citizens’ council at the cantonal level

Figure 2 shows how a permanent citizens’ council could be embedded in existing structures at the local level. However, this model is not intended for cities with their own parliaments – for these, a model similar to the cantons would be more appropriate – but rather for smaller municipalities with 3-5,000 inhabitants. 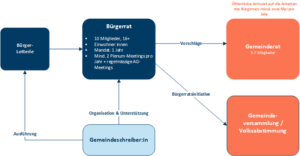 In contrast to many other European countries, the development towards participatory and deliberative approaches to democracy has not yet really taken off in Switzerland. Although some pilot projects have been launched in recent years (especially in larger cities), they are almost exclusively of a consultative nature. Almost never have these projects delegated concrete decision-making powers directly to citizens. However, this is a central aspect of the approaches presented here. The participation of citizens is not only limited to feedback and non-binding suggestions, but in addition, part of the decision-making power is shifted from the previous institutions (and from politicians) to the citizens’ councils. Experiences abroad have shown that this is appreciated by citizens. They want to be taken seriously, are willing to contribute and take responsibility.

Nevertheless – or precisely because of this – approaches such as the citizens’ councils outlined here are still likely to have a difficult time in Switzerland. Politicians are very sceptical about these approaches, as can be seen from the reactions to the proposal to establish a “climate council”. Moreover, the problem pressure on Swiss democracy seems to be less pronounced than abroad. However, Swiss democracy is not immune to the challenges mentioned above. In this respect, it would be regrettable if such approaches were not increasingly tried out at least at the local and cantonal level and adapted to the specific framework conditions of Swiss democracy and politics. This would be an opportunity to further expand and modernise democracy that we should not miss.

About the “Basel Democracy Lab

More information about the lab can be found here. The project team will report continuously on the projects and the insights gained from them in a series of articles.

So far, the following articles have been published:“Exploring Democracy 2.0 with Experiments” and “TheFuture of Democracy: Why the Trends Participation and Deliberation Give Hope“.

Jan Fivaz is a research associate at the Institute Public Sector Transformation at BFH Wirtschaft. He is investigating the use of the online voting tool smartvote as part of a research project.