Towards deep learning-based weather reconstruction of the Great Frost

In the early 18th century, Europe experienced a mini ice age, which has been proven to be the coldest period of the last 1000 years [1]. Our author studies how methods from the field of Deep Learning can contribute to a better understanding of the progression of this cold period, which is known as the “Great Frost”.

At the beginning of the 18th century, from the end of 1708 to the beginning of 1709, Europe experienced a cold period that was to go down in the history books as the millennium winter [1]. The so-called “Great Frost” had substantial consequences for both humans and nature. In this winter, for example, Lake Garda froze completely and most of Lake Constance. In France, which was hit particularly hard by rapid and severe cold snaps, it is reported that entire rivers froze over and harbors were enclosed by ice. The subsequent famine due to the failed harvests caused an estimated 600,000 deaths from starvation in France [2].

The unusual harshness of this winter gave scientists at the time cause for a large number of publications, but in comparison to today, only a few and incomplete measurements are available [3]. In total there are time series from 15 locations known from this winter, describing variables such as temperature, wind, air pressure, and precipitation [4]. 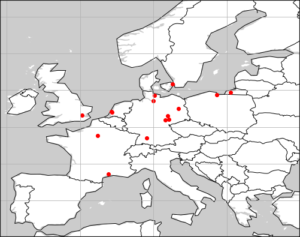 Figure 1: Spatial locations at which metrological time series of the Great Frost are known.

For today’s research it is of great interest to know how “hard” this winter actually was. That is, where and when the temperatures actually fell and how drastically. If this information was fully known, impact models could be used to answer important questions for future risk assessment [3]:

The few and temporaly incomplete observations available are not sufficient to answer the above questions. To remedy this problem, weather reconstruction comes into play. In this context, weather reconstruction is the estimation of non-observed measurements. This is needed in temporal as well as in spatial terms. On the one hand, the temporal gaps of the existing observations shall be closed in such a way that daily values from October 1708 to April 1709 are at one’s disposal. On the other hand, a spatial representation of the meteorologic variables covering the whole of Europe needs to be available.

Figure 2: Ilustration of weather reconstruction from a few measurements to a fine granular grid.

Recently, the potential of deep neural networks to produce weather forecasts has been investigated in several scientific studies [7]. The approaches explored are mostly based on video frame prediction models from the field of computer vision, which have already achieved great success [5].

In such studies, temporally as well as spatially complete data sets were used. Here, one can imagine a sample of the data set as an image (e.g., a map of Europe), which contains meterological variables instead of the RGB values in the channel. Each pixel of a video frame thus represents weather values of a certain region at a certain time [6].

Our problem has many parallels to the prediction of weather data. However, with the essential difference that our pixel values are known only sporadically. In hopes of overcoming this obstacle, we are studying the usage of a method that also comes from the field of computer vision; namely Video Inpainting. Video inpainting is about filling damaged or missing parts of frames of a video stream with believable content, mostly with the help of deep learning algorithms [8].

Figure 3: An example of how a video inpainting model reconstructs a heavily masked image [10]

The performance of current inpainting algorithms for images and frames generally decreases as the percentage of missing parts increases [9]. This presents us with a possibly great challenge, since in the case of the Great Frost, over 99% of the data on the spatial grid is missing. For this reason, we start our studies based on metrological data of the last 60 years, which are available for Europe in a temporally as well as spatially fine-granular and complete form. This will allow us to artificially define the ratio of missing areas and, initially on lower percentage values, compare the performance of different state-of-the-art video inpainting approaches applied to weather reconstruction.

Yannis Valentin Schmutz is a Research Fellow at the Institute for Data Applications and Security (IDAS) at BFH Technik & Informatik. He is currently pursuing a Master of Science in Engineering | Profile Data Science.