From fuzzy voting to liquid feedback – how much change does democracy need? The project “Democracy Lab Basel” by BFH Wirtschaft and Smart Regio Basel investigates the challenges of political participation and how democratic structures and processes in Switzerland can be modernised. The researchers have some suggestions – an insight into the newly launched project.

In international democracy ratings, Switzerland is regularly found in top positions. For example, it takes first place in the Democracy Barometer, which measures the quality of democracies, has by far the most developed direct democracy and has the highest level of trust in government of all OECD countries. However, familiar problems and new challenges are often forgotten: a notoriously low voter turnout, declining trust during the Corona crisis, obvious difficulties with digitalisation, a lack of militia personnel especially in smaller municipalities and, as an evergreen, the lack of opportunities for foreigners to participate in decision-making, even if they are very well integrated. For Swiss democracy, too, all that glitters is not gold.

Participation rights alone are no guarantee for political equality

In particular, the well-developed democratic institutions mask the fact that the existence of formal instruments does not guarantee equality in terms of participation, representation of interests and policy-making. On the contrary, the low level of participation (both in elections and at the ballot box, and most clearly at municipal assemblies) constitutes a first source of inequality. This is because political concerns are only heard if they are actually put forward. Conversely, low participation can lead to individual interests being given too much weight – measured against their real importance. The well-known democratic deficits, which affect both representative democracy (i.e. parliaments and elected governments) and direct democracy (referendums and municipal assemblies), can ultimately lead to decisions made in a formally democratic manner not reflecting the wishes of the population. This is where the new project “Democracy Lab Basel” comes in. Co-funded by the Mercator Foundation Switzerland and carried out jointly by Smart Regio Basel and BFH Wirtschaft, an experimental framework is being created in the canton of Basel-Stadt to test and evaluate a range of approaches to democratic reforms together with local citizens. It is important to emphasise that this is a scientific project; we are not definitively introducing any innovations, but merely clarifying whether there is a need for the proposed reforms, whether the innovations are understood and accepted, how they are handled in practice and what effects on democracy and political decisions could be expected.

More qualitative participation of those entitled to vote

For this purpose, a random sample (Swiss citizens and resident foreigners aged 16 and over) will be drawn from the cantonal population register. The selected persons will be invited in writing to register voluntarily and flexibly for participation in the various sub-projects of the “Democracy Lab Basel”. Naturally, we hope for lively interest and a correspondingly large number of responses. Since the overall project will run over a longer period of time until the end of 2024, it is planned that the sample will be followed up or renewed at regular intervals. In concrete terms, the “Democracy Lab Basel” is pursuing a whole series of projects, which are divided into the following four modules (cf. figure): 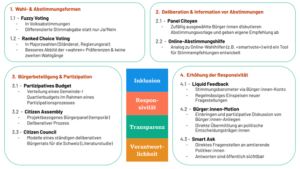 The focus of the “Democracy Lab Basel” is thus on the experimental use and evaluation of reform ideas, which are primarily intended to improve the inclusion of social concerns and the responsiveness of politics to the concerns expressed. Thus, ideally, these innovations contribute to somewhat balancing the political inequalities described at the beginning. However, the scientific approach is fundamentally open-ended. The results of the individual projects will show which reform ideas actually bring the desired added value.

About the “Democracy Lab Basel

More information about the laboratory can be found here. The project team will report continuously on the projects and the insights gained from them in a series of articles.