How Satellite Images help to detect the Severity of Wildfires

Wildfires lead to changes to our ecosystems and can have serious social and economic impacts. In the last few years, the number of wildfires is believed to have increased due to a change in the climate which brings prolonged periods of drought [1]. In Switzerland, wildfires are predominately occurring in the alpine regions of the cantons of Valais, Ticino and Graubünden.

The consequence of these fires varies due to the different topologies. In the canton of Tessin, for instance, most forests have a protective role against landslides, erosion, debris flows, and rockfall [2]. In consequence, forest management takes an important role in the recovery of burned areas. Currently, damage assessment is carried out manually each year after a wildfire. Such tasks are laborious, but necessary, in order to determine the adequate measures needed. Automating this process using satellite images would therefore be beneficial to the domain experts in charge of it.

The intensity of a fire informs about the amount of energy that has been released [3]. On the other hand, the severity of a fire is defined as a measure of “the loss or decomposition of organic matter, both aboveground and belowground” [3]. Therefore, the severity is not only impacted by its intensity, but also by the type of vegetation on the ground.

In the canton of Ticino, a predominant tree species in the lower altitudes, the Sweet chestnut (Castanea sativa), is quite resistant to fires and recovers fast due to its capacity to rapidly resprout, contrary to the Oak trees (Quercus robur and Q. petreae). However, their thick bark makes them resistant to low-intensity fires. Fires of low intensity can cause extensive damage to the Beech tree (Fagus sylvatica), which are also sensitive to fungi attacks. Fungis can lead to their fall, even years after a wildfire [4]. Such delayed deaths are the reason for the need for long-term fire severity assessments. Figure 1 illustrates the recovery or late fall of some trees four years after the Sasso Fenduto wildfire in Cadenazzo, in 2018. 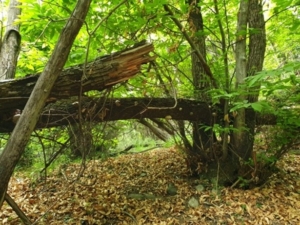 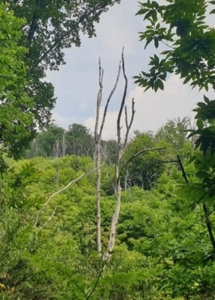 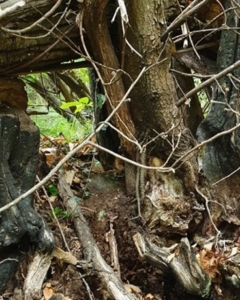 Satellites have the advantage of covering a large area and provide a high spatial, spectral and temporal resolution making them very suitable for analysis of wildfire damages [5]. Images used for a fire severity classification are predominately coming from the Landsat or Sentinel satellites, due to the suitability of their spatial resolutions [6]. Finally, the choice will depend on the use-cases. The differences between both satellites are shown in table 1. The difference in the spatial resolution is illustrated in figure 2.

Table 1. A comparison between Sentinel 2 and Landsat 8 satellites [7]. 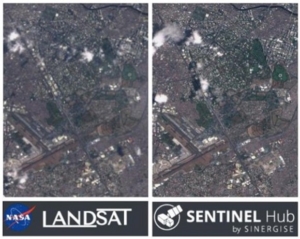 Sentinel 2 spectral resolutions enabled to acquire a higher accuracy for high severity classes, however, Landsat 8 is better suited to accurately classify low severity areas. The coarser resolution of Landsat 8 also allows the representation of an area into one single pixel. In contrast, the Sentinel 2 spectral wavelengths enable us to see more details on the ground, thus making it more suitable for topographically complex locations [7]. Due to its superior low fire severity detection, the Landsat satellite is a better fit for Swiss use-cases. This difference in fire severity classification is illustrated in figure 3.

Fire severity can be classified using the method of White et al. which comprises five categories. The thresholds of each class are described in table 2 [7].

Methods for a Fire Severity Detection

Several methods have been used in recent researches for a classification of fire severity. This includes the computation of spectral indices, using the spectral bands of the satellites shown in figure 2. The most popular index in the last past years is the Normalized Burned Ratio which uses the Near Infrared (NIR) and Longer Shortwave Infrared (LSWIR) wavelengths of the satellites [8]. Better results have been obtained comparing the difference between the NBR of pre-fire and post-fire images, the so-called dNBR [9].

With the emergence of deep learning, new methods have been developed. The current state-of-the-art in this domain is the use of a specific type of deep learning, namely a Convolutional Neural Network (CNN). The CNN can be trained on post-fire satellite images only. For each image, it aims to detect whether a pixel belongs to a burned or an unburned location. Once such a classification has been conducted, another CNN can learn to detect the severity of the burned pixels, using spectral information. Each described method has its own advantages and disadvantages. Their precision has been found to be equal. Nevertheless, deep learning methods have brought a new perspective to this field of studies as they are very efficient and easy to automate [10].

Souhir Ben Souissi
Dr Souhir Ben Souissi is a Tenure Track Professor of Data Engineering at the Institute for Data Applications and Security (IDAS) at the Bern University of Applied Sciences. Her research focuses, among other things, on the topicsof Medical Decision Systems, Semantic Web Technologies and Multi Criteria Decision System.

Céline Hüttenmoser is a research assistant at the Department of Technology and Computer Science at BFH.