How mature is the use of self-driving minibuses?

They are small, safe and cheap: minibuses without drivers and chauffeurs. Bernmobil has tested them in a pilot project in the Matte and Marzili districts of Bern. Prof. Dr. Stefan Rose from the Institute of Marketing & Global Management and his team accompanied the test with scientific studies.

Autonomous vehicles, electrification and ride sharing are the potential milestones with which we can make urban mobility more sustainable. Traffic congestion and air pollution can thus be reduced and, in the long term, inner-city spaces can be redesigned. But even if the technological challenges are solved, the introduction of autonomous vehicles will only succeed if the use of these vehicles is also accepted by the users. The Department of Economics at the Bern University of Applied Sciences has therefore investigated how the self-driving buses are perceived by passengers, neighbourhood residents and project participants themselves. A total of 80 test passengers, 68 residents from the neighbourhoods and eleven Bernmobil employees took part in the studies. 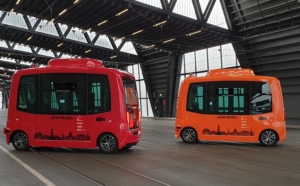 These self-driving buses were used in the pilot project in the Bernese districts of Matte and Marzili. (Photo: Bernmobil)

In addition to the experiences of the test passengers, the researchers also sought the opinion of the residents living near the route. Because of the currently still low speed, the ticket purchase and booking process, as well as a certain unpredictability, the minibuses were often perceived as an obstacle in residents’ traffic. In addition, from the residents’ point of view, an autonomous minibus currently offers only limited added value in neighbourhoods such as Matte and Marzili, because the distances within the test area can be covered on foot. However, the autonomous minibus could offer added value for residents with limited mobility or for tourists. The Bernmobil staff involved in the pilot test were also asked: the majority of them believe that autonomous driving is the transport of the future, but the technology is not yet sufficiently developed the technology is not yet sufficiently developed. Above all, the vehicles cannot yet recognise obstacles well enough, which leads to frequent emergency stops and unpleasant situations with other road users. The minibuses are also less suitable for use in inner-city areas, as they are not accepted by other road users and are not yet sufficiently autonomous.

So self-driving minibuses still need to be technologically developed further. In order for other road users to accept the minibuses, they must be able to integrate smoothly into mixed traffic in terms of speed and driving behaviour. In addition, they need a clearly defined area of use that offers users significant added value. For example, they could be used as feeder vehicles or outside of busy areas such as factory premises and airports.

With the pilot project “self-driving vehicle”, BERNMOBIL is testing the use of autonomous minibuses for passenger transport. In order to research the acceptance of this offer, the Marketing Division has accompanied the project scientifically. Further information on the project can be found here.

This article was previously published in the customer magazine “Presence” of BFH Wirtschaft.

Dr Stefan Rose is a research professor at the Institute of Marketing & Global Management at BFH Wirtschaft. His research is dedicated to these topics: Consumer Behaviour, Psychological Distance, Construction Level Theory, Mental Simulation and the Acceptance of Innovative Vehicle & Mobility Concepts. He holds a PhD from the RWTH Aachen University.