How an app assesses the usability of forest roads

Forest roads are the basis for sustainable forest management. Forests should always be easily accessible for ecological, social and economic reasons, but roads are constantly exposed to the elements and can easily become damaged. BFH researchers from BFH Technology & Informatics and HAFL have now developed an app that records potholes, among other things.

DeepPuddle is an AI mobile application for monitoring the condition of forest roads during operation. Where conventional concepts have so far aimed at a complete recording of the current road quality, the app focuses on the rapid detection of faults. DeepPuddle was developed as part of an interdepartmental research project by researchers from HAFL and the Department of TI.

What is the concept of DeepPuddle? 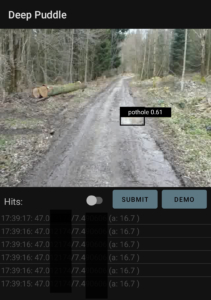 From a truck or on foot, the DeepPuddle app visually captures the forest trail. In the process, an AI analyses image information and detects disruptions that could affect the removal of timber or access to a logging area. One of these is the eponymous puddles, or in summary, waterlogged areas. In these places, the load-bearing capacity of the forest road is negatively affected for a longer period of time, even after the surface of the road has dried, whereupon increased road wear is to be expected. Through the use of the app, developing damage of this kind is constantly checked, whereby measures for repair can be taken at an early stage and timber removal can also be ensured on remote cutting areas. Further conceptual integrations, which also arise worldwide due to the different geographical and topographical requirements of forestry operations, are conceivable due to the open logic of the application and can be included in the respective maintenance concept.

Is the project Industry 4.0?

The use of special interfaces and the provision of data in standardised form allow the system to be integrated into the Industry 4.0 context of the Competence Centre Forest and Wood 4.0 and its S3I communication infrastructure. For this purpose, and in order to be able to embed collected information in a meaningful way that can be extended by other monitoring systems, a digital image (digital twin) of a forest road was modelled, which combines a large number of the parameters relevant for road construction. Each piece of information collected by DeepPuddle is finally passed on with parts of the structure of the digital twin itself, in order to be able to link it unambiguously with information from other sources at any time.

What happens to the data?

One focus of the implementation is based on the principle that companies do not automatically lose their data sovereignty even in the Industrie 4.0 age. Basically, the S3I specifies the security standards for communication and the distribution of rights among the actors and provides basic functions. However, the DeepPuddle service for the administration and renewed provision of the data once collected is installed directly at the forestry operation. In this way, forestry operations can specifically control access to their own database and the degree of interaction with third parties.

With new project partners at home and abroad, the system is to be refined and put to practical use. New functions in the front and back end as well as field tests of different application concepts should increase the quality of the information, show the value of the design of individual components and, along the way, make Industry 4.0 and new technologies in the forest and timber sector tangible.

Michael Starke is a research associate in Forest Process Engineering at the HAFL School of Forest, Agricultural and Food Sciences at BFH. He previously worked for several years in the Bavarian Forestry Administration. He is currently writing his doctoral thesis on innovative monitoring concepts in the field of forest technology in cooperation with the University of Natural Resources and Life Sciences Vienna.