Density stress of a different kind 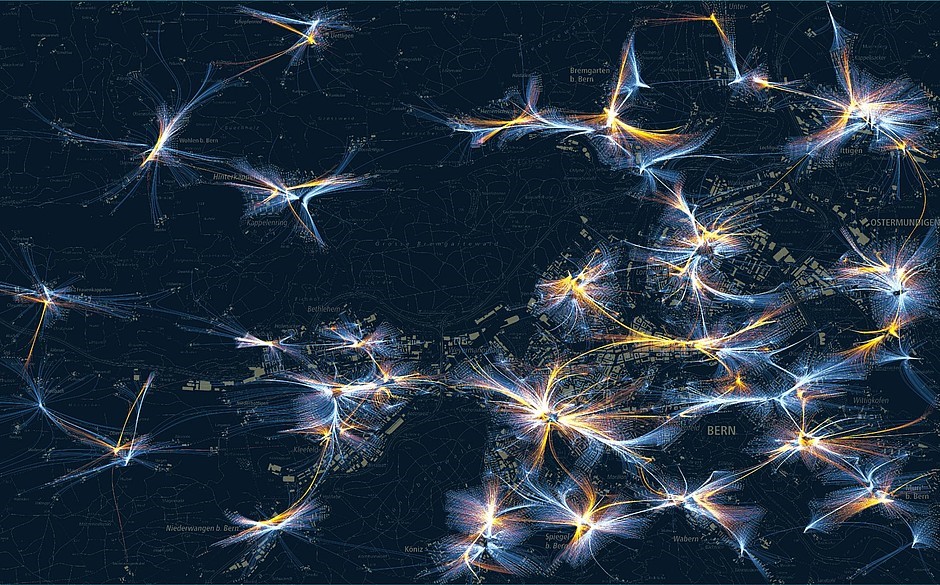 Where can older people in Switzerland find suitable surroundings? The research project “Urban Landscape 66+” of the competence area Dencity of the BFH Architecture and Wood Constructionmakes visible where four towns and villages still show a need for development in this respect. The film could also be a modern work of art in its aesthetic presentation. A closer look reveals the outlines of the Aare River around Bern’s old town. Yellow and blue lines cover the map and bundle into “points of interest” of the two colours. Yellow stands for the movements of older people, blue for young people up to 20. The slide is a visualisation of possible simulated movement patterns in the city of Bern. The separate paths show that all people have mobility requirements, but that we move differently in space with increasing age. We are in the middle of the results of the “Stadtlandschaft 66+”, a tool for contextual spatial analyses developed by Dencity. With the help of database analyses and qualitative surveys, a research team is decoding a part of Swiss DNA that is still little researched. As the name suggests, the project focuses on older people aged 66 and over. Where they live and where their important places, the points of interest, are located. These include shopping, health care and popular meeting places. With a total of over 400 categories and subcategories of ADAM, the “Automatic Density Analysis Model”, points of interest are only one of several genres. Potentials and deficits of places, city centres and peripheral areas thus become visible. The research team does not reduce complexity, but rather increases it with the help of Big Data and at the same time quantifies criteria of quality of life. In order to verify the quantitative measurement methods as well as the analysis of Big Data, the research team has people from the places studied stick “points of interest” on maps and answer questions, and compares the results with the computer statements. There is a high degree of agreement between the quantitative and qualitative data collected, the results are valuable. And they are sensational. In order to be able to classify the results appropriately, it is necessary to go back a little. The individualisation of society is progressing, the baby boomers who are now entering retirement age are ageing differently. They have demands and want to live individually. Individualisation is also increasing strongly in old age, but the appropriate infrastructure is missing or not yet ready. In addition, there are other factors such as shrinkage, the opposite of densification. This process is familiar from mountain villages, but it can also be observed in places like Langenthal or Huttwil, the smallest of the four places studied: In Huttwil, two developments overlap: Shrinkage and real estate as an investment. The latter, a consequence of the economic crisis of 2001, has led to building for money and no longer for people – people have parked the money in concrete. Both factors lead to an increased vacancy rate of flats. Flats that are not within walking distance of the centre and are often poorly served or not served at all by public transport. People over 65 who are connected to the public transport network also use it and do without a car, says Christine Seidler. As in the case of Huttwil, however, many villages are geared towards single-family homes and motorised private transport. Older people become dependent on others or – socially isolated – stay at home. The step into a retirement and nursing home is therefore often forced prematurely and not primarily for health reasons. A modern work of art? No, a visualisation of possible simulated movement patterns in the city of Bern. The movements of older people are shown in yellow, those of young people up to the age of 20 in blue.

Premature admission to a nursing home is costly for society

The same result can be seen in Zurich, albeit for different reasons. In the metropolitan area, high demand creates expensive living space. So-called gentrification is forcing the less well-off seniors out of the city. They go to the countryside – or to a nursing home. The latter costs society massively more than if elderly people stay at home and receive outpatient support. In order to achieve the goal of the Urban Landscape 66+, which is to increase the quality of life of older people, the project team proposes a portfolio of measures. In general, participatory planning instruments that involve people are required. As is true for today’s generations, it is also true for future generations: They don’t want something to be done for them, they want something to be shaped and decided together with them. In the case of Zurich, densification is unavoidable, but ideally planned in stages and with care. A buzzword that comes up repeatedly is “social densification”. In the case of Huttwil, too, it is advisable to densify socially. Reactivate the principle of neighbourhoods in many ways. To build micro-centres. Sharing responsibility for older people. Involve them with social projects. Establish car pools for senior citizens. You cannot cure, but you can help to initiate a paradigm shift in the planning structure.

Cityscape 66+ is still in its infancy, the potential has only just begun to be tapped. The research team of the Dencity competence area is currently looking for partners who deal with demographic change in settlement development in order to further develop the model. Whether municipal executives, administrations, developers, housing cooperatives or associations for the elderly – ADAM can provide approaches for finding answers to socially relevant questions.

Swiss cities are shrinking, and yet construction continues. This is the case in Huttwil. The high housing vacancy rate has negative economic and cultural consequences. With the BFH’s stedtliwerkstatt.ch project, measures are now being taken for a more attractive Städtli that actively involve the population.

From medicine, to garment master at the opera and theater, via politics to spatial planning to urban planning with a knee-deep loop into economics, arriving at the University of Applied Sciences Graubünden as a lecturer at the Institute for Building in the Alpine Region (IBAR). From 2017 to 2019 Christine Seidler held the co-leadership of the competence area Dencity at the Bern University of Applied Sciences BFH.

Marcel Abegglen is an assistant in the Dencity competence area of the Institute for Urban Development and Infrastructure at the Bern University of Applied Sciences for Architecture and Wood Construction.