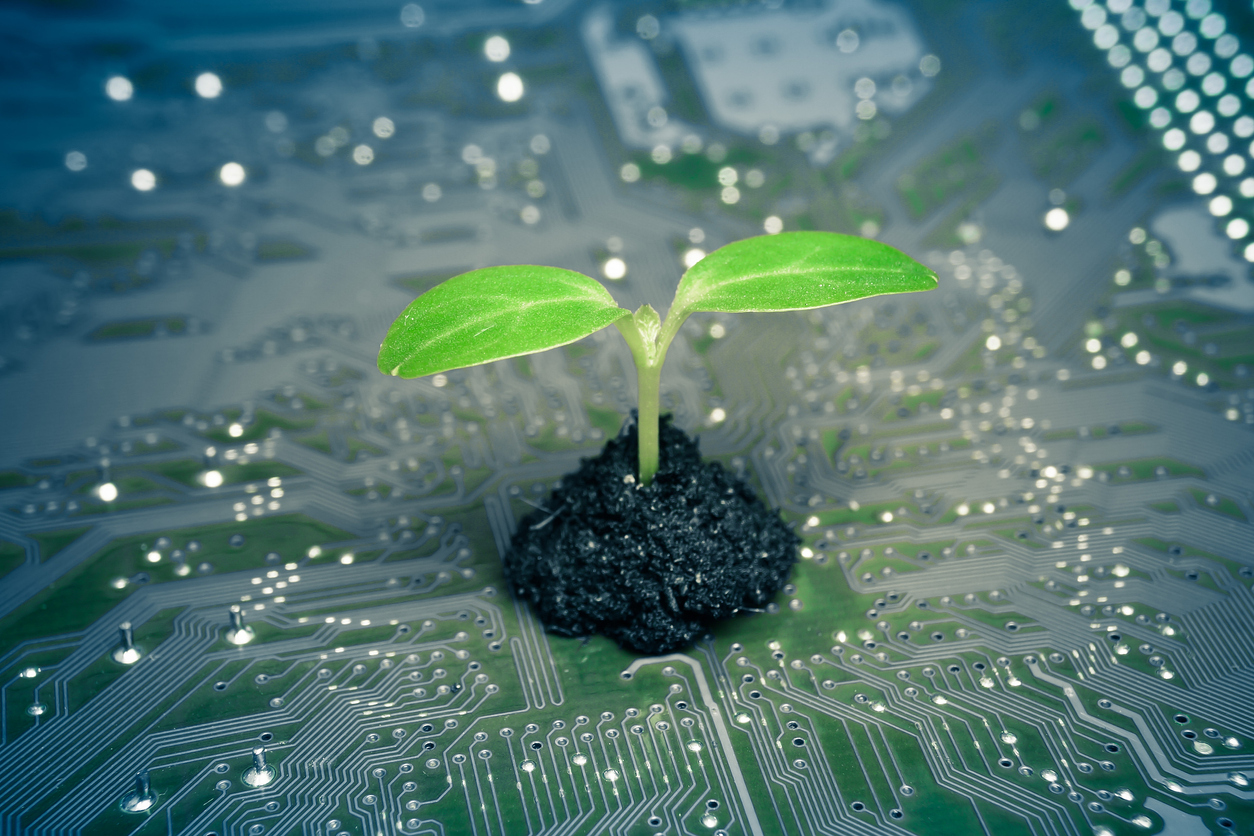 New media uses have a big impact on the consumption of energy resources. Two-thirds of the world’s electricity is generated by burning fossil fuels, which are very harmful to the biosphere. Watching video online is particularly energy intensive. In view of the stakes involved, the entire population should be made aware of the issue and given the means to act. Digital applications can facilitate this necessary awareness. Digital technologies are generally seen as a factor of progress. However, the digitalisation of all human activities is the source of very serious threats to the biosphere. Cyberspace is still often perceived as a virtual world. This is obviously an illusion, as it would not exist without the technical infrastructures and data that circulate in it. All this equipment requires a wide variety of raw materials, sometimes very rare, and energy for its construction. The corollary is the depletion of resources, pollution, waste production and the release of greenhouse gases. The result is global warming and irreversible damage to the planet’s ecosystem. Storing, processing and transmitting digital data requires electricity, which is mainly produced worldwide by burning oil, coal and natural gas (67%), as well as hydroelectric power (16%) and nuclear power (12%). The share of new renewable energies (solar, wind, biogas, waste) is only 5% (Swiss Federal Office of Energy SFOE, 2015). In Switzerland, about 8% of electricity is used by the Internet infrastructure and Swiss households use more than 6% of the total electricity consumed in the country to power their electronic devices (2015). This proportion is expected to grow with the planned proliferation of connected devices (Internet of Things). In comparison, the rail transport network consumes just over 5% and public lighting less than 1%. Electricity production in Switzerland is mainly hydro (56%) and nuclear (38%), while the share of fossil fuels (2%) and new renewable energies (4%) is low. However, this distribution of energy sources is set to change, as after the Fukushima nuclear disaster, the Federal Council reviewed Switzerland’s energy policy (Energy Strategy 2050) and the principle of abandoning nuclear power was adopted. The government has drawn up a package of measures which aim to “reduce energy consumption, improve energy efficiency and promote renewable energies”. Reducing electricity consumption without increasing the share of fossil fuels is a major challenge. But in a world of interconnected networks where data flows across the globe, problems cannot be solved at the national level, as consumers may be far away from the service providers that process and store their data. Data centres are likely to be located in regions that rely heavily on fossil fuels to produce the electricity needed to run them.

A key factor, the behaviour of individuals

People’s behaviour has a major impact on the demand for electricity generation for the construction and use of digital equipment. According to the study Lean ICT – For digital sobriety (2017) by the French think tank The Shift Project, the energy consumption of all connected equipment (communication networks, data centres, terminals, sensors) is divided between 45% for their production, respectively 55% for their use. The same organisation highlighted that videostreaming generates 80% of the Internet’s data flows worldwide – in 2017, Greenpeace also published a detailed report on this phenomenon. Other uses therefore account for only 20% of the data that passes through digital networks. Video consumption is divided between four main types of use: video on demand (e.g. Netflix) 20%, pornography 16% (YouPorn), video hosting platforms (YouTube) 13%, social networks and websites 11%. The remaining 20% is divided between streaming TV (Swisscom), live video transmission (Skype), video surveillance, online video games. Thus, today, a large part of the Internet bandwidth depends on the transmission of video images offered by the entertainment industries. This observation raises the question of the need to deploy equipment to constantly increase the available bandwidth of digital networks, setting no other limit for individuals than their financial capacity to pay for the services consumed, the network connection and the equipment. Services which, it should be remembered, are 80% dependent on electricity generated from fossil and nuclear fuels. Does the need for entertainment condemn humanity to the inevitable destruction of its living environment? What can we do about it? In the hyperconnected global space and in an economic system governed by supply and demand, everyone bears a share of the responsibility. However, this is limited by design techniques that surreptitiously aim to capture attention and direct behaviour. A large part of the population has no idea of the functions of the interactive visual devices they use or what goes on “behind” their screens. In particular the energy consumption required to satisfy their desires. In view of the stakes involved, the entire population should be made aware of this issue in order to make them aware of the potentially deleterious consequences of their media use. By encouraging them, on the one hand, to reduce the volume of their streaming video consumption and, on the other, to limit the purchase of new equipment.

One strategy that has not yet been sufficiently explored to make users of digital services aware of the effects of their practice is to inform them during use. Informing them in real time of the volume of data consumed and the consequences for the environment could be particularly effective. It would then be appropriate to suggest ways to use their equipment more wisely or alternatives. The Shift Project has developed an application (Carbonalyser) that estimates electricity consumption (kWh) and greenhouse gas impact (grams of CO2) based on the amount of data downloaded, as well as their equivalent in the number of smartphone recharges and car kilometres travelled. This application can be used with the Firefox browser or a smartphone. All the calculations are done in the device, which allows the privacy of the users to be respected. 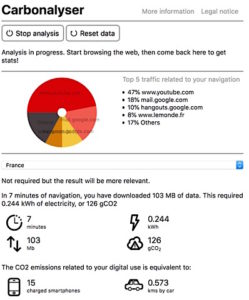 Illustration: Screen shot of the Carbonalyser application, The Shift Project.

This application is very useful and gives a good idea of the possibilities that can be offered to individuals to measure the impact of their digital uses on the environment. However, the summary consultation of the results needs to be analysed afterwards. Efficiency could be increased by adding a function to the application that shows the intensity of the downloaded data flow in real time and its potential to harm the environment, for example by means of a colour code (green, orange, red, black). This could take the form of a bar showing the intensity of the stream, similar to some sound level meters. In addition, attractive information and advice on how to reduce the energy footprint of media use would be provided. Promoting awareness of the environmental impact of one’s use of new communication technologies is the first step that should enable everyone to make informed choices and, better informed, to be able to influence decisions relating to the digitalisation of society.

You can find the full presentation here.

Jean-Claude Domenjoz has taught visual communication and trained teachers in media pedagogy and the didactic use of information and communication technologies. He has been involved in the creation and testing of many professional training programs for teachers. Since 2015, he runs the blog "Education aux médias et à l'information".