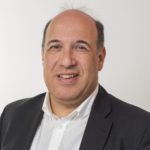 Dr Alain Gut is Director of Public Affairs at IBM Switzerland. He is involved in numerous commissions and committees on the topics of education and IT, cyber security, mobility and data policy.

Alessia Neuroni is head of the Institute Public Sector Transformation at BFH Wirtschaft. She is responsible for Big and Open Data at the BFH Center Digital Society. Her thematic focus is on data governance and leadership of cross-agency innovation projects.

Kathrin Schmidt is a research associate at the Institute Public Sector Transformation at BFH Wirtschaft.