You are here: Home1 / Contributions EN2 / Event report EN3 / How women are discriminated against in the labour market
Event report EN,Transdisciplinary EN

How women are discriminated against in the labour market 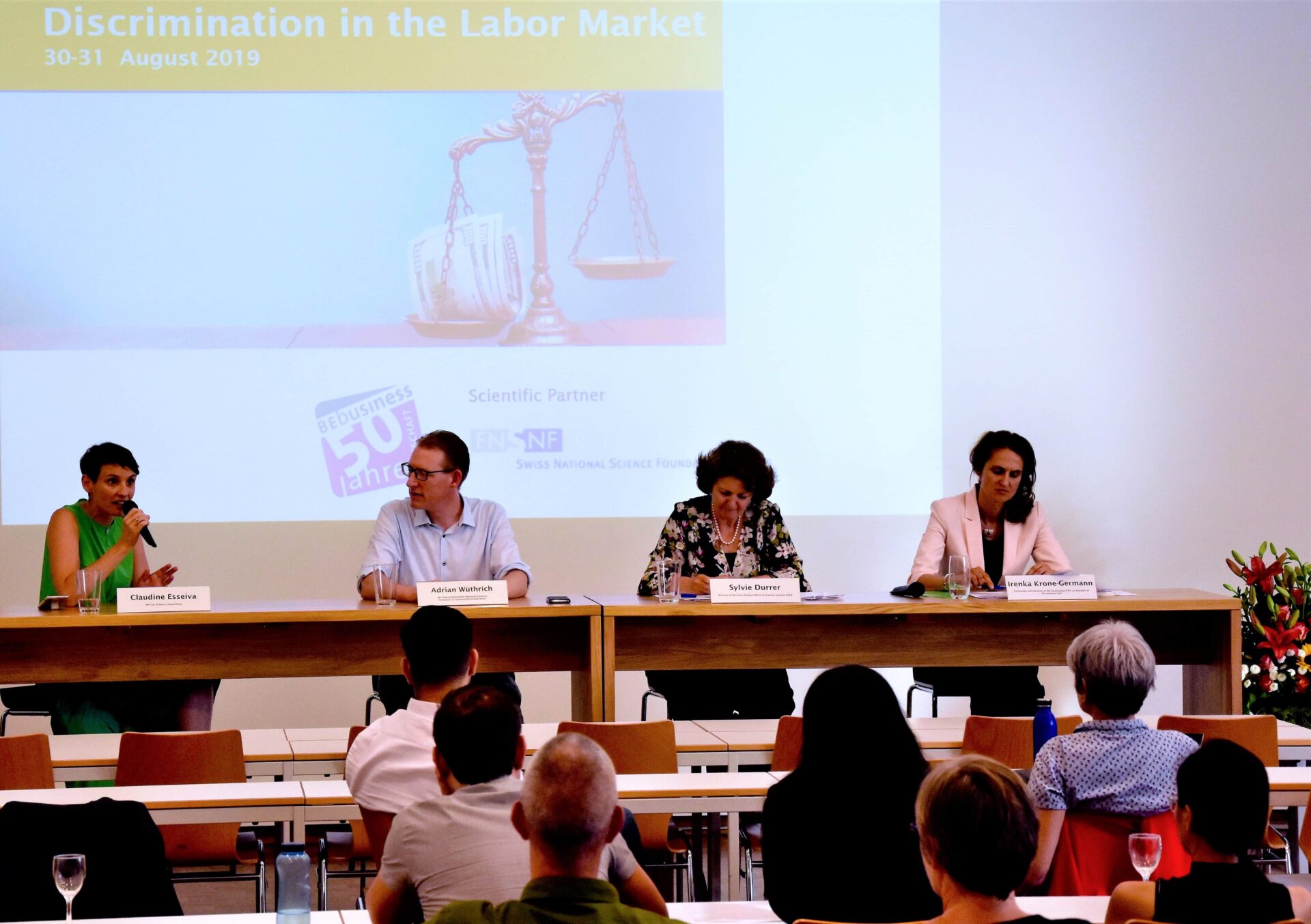 There is no gender discrimination (yet) in the search for an apprenticeship – but there is a lot of it on the labour market: At the conference on discrimination on the labour market at BFH Wirtschaft, scientific data on these realities was provided and then discussed with representatives from politics and administration. Everyone agreed that there is still a lot to do. Right at the beginning of the “3rd International Conference on Discrimination in the Labour Market”, BFH Director Ingrid Kissling stated in no uncertain terms: “Switzerland is a very conservative country.” This means, among other things, that women in this country still do most of the (unpaid) family work and often reduce their workload to do so. In addition, mothers are discriminated against in the labour market because of the traditional society. “The women’s strike did send a powerful signal in this regard,” she said. “But it takes not only the political will to change, but also scientifically sound facts.” Providing these was the declared aim of the symposium. Its motto was: “Evidence-based policy for a better world Doris Weichselbaumer, gender researcher at Kepler University Linz, presented the results of a new study in which BFH was also involved. The aim was to investigate whether women of childbearing age are discriminated against in the labour market. To do this, the research team submitted around 9,000 fictitious job applications for accounting and secretarial jobs in Austria, Switzerland and Germany. The fictitious candidates were all 30 years old, male or female, married without children, married with children of pre-school age, married with children of school age or childless singles. Some applications did not include any personal information at all.

The results showed that in full-time jobs the “reproduction question” did not play a role, so women were not discriminated against here. “That came as a surprise to us,” Weichselbaumer says. The researchers’ interpretation. “Those who apply for a full-time job signal that the children are taken care of at all times, while mothers in part-time jobs signal that they take on the responsibility for childcare and so could be absent from the workplace at times.” In the case of part-time jobs, the research hypothesis was confirmed: According to the study, married women without children in part-time jobs had the worst chances of being invited for an interview, while mothers with older children had the highest response rate. “We had assumed that mothers with older children would do better because they are likely to have already finished family planning.” Men, incidentally, were less likely to receive an invitation to interview in this experiment overall – suggesting that the occupational fields selected still have significant gender connotations.

Effects in the apprenticeship market

Does gender-typical discrimination in the labour market already start with young people? This is the question addressed in a recent study led by Ana Fernandes, economics professor at BFH Wirtschaft. Her research team also sent out fictitious letters of application – but from Swiss young people looking for apprenticeships in Basel, Bern, Zurich and Lausanne. In addition to the influence of gender in the selection process, the researchers were also interested in another question. “Young people often mention their parents’ occupation in their application letters,” says Fernandes. “We wanted to know if this plays a role in the selection process.” The analysed data show: No gender-specific discrimination can be found on the apprenticeship market. The professional background of the parents also hardly plays a role – with one exception: “Girls who have a professor as a father are the rock stars in the apprenticeship search.” Their chance of being invited to an interview increases by 20 per cent. That sounds like good news. The only thing is: these young female “rock stars” grow up to be (working) women. At the latest when they want to start a family, they lose their “rock star” status and fall behind their male peers. The statistics speak a clear language here. After the birth of their first child, women on average work less than men and earn less. This so-called “child penalty” follows women throughout their lives: they falter in their careers and have a higher risk of poverty in old age. Another disadvantage is that Switzerland has only a very short statutory maternity leave compared to other countries and the costs of childcare are very high. “From this, one can conclude that investing in childcare places is a promising measure to counteract gender discrimination in the labour market,” Fernandes said.

Childcare places are as much a part of a country’s infrastructure as roads, railways and airports. (Sylvie Durrer)

This was precisely the question addressed by the subsequent panel with Sylvie Durrer, the Federal Commissioner for Gender Equality, Irenka Krone, founder and managing director of the Part Time Optimisation (PTO) association, Claudia Esseiva, a Bernese FDP councillor, and Adrian Wüthrich, SP National Councillor and president of “Paternity Leave Now” and the Travail Suisse trade union umbrella organisation. “Childcare places are as much a part of a country’s infrastructure as roads, the railways and airports,” Durrer said. “But for that we have to change the narrative in this country. Many still claim that outside childcare is bad for children.” That working mothers indeed still face a lot of headwind was confirmed by Esseiva – mother of a 5-year-old son from her own experience: “Many people tell me, you should take care of your child first. So we have to really fight, and sometimes that’s not fun.” After the birth of her first child, Irenka Krone also received not only congratulations but also the advice: “Just don’t have more children or you’ll jeopardise your career.” Krone has had more children and pursued her career – in part-time jobs – despite this warning. Her message: “Part-time work itself is not the problem. The problem is the nature of part-time work: we need to optimise part-time work for top positions.” This is exactly what she offers with her organisation PTO, where she advises employers. For all four of them it was clear: women have to be better integrated into the labour market, not least because they are lacking as workers.

Fathers are the decisive cog

For this to succeed, however, the framework conditions for fathers must also change. “Switzerland is a desert for families,” said Adrian Wüthrich. He advocates a 4-week paternity leave so that “fathers can also be fathers.” In addition, he would like part-time work to be a matter of course for men as well. “Fathers also want to work part-time, but the business bosses fear that too little work is then done.” Here Claudia Esseiva interjected: “We can put as much as we want into the infrastructure, it won’t bring anything. Men are the key to change. If all men demand part-time work, things will change.” She also pointed out that she and the other panelists are not representative of the population. Therefore, she said, it is all the more important to keep talking to people and showing them the consequences of their actions. The 90-minute discussion clearly showed one thing above all: equality may be enshrined in law in Switzerland, but it has not yet arrived in people’s minds or in many company boardrooms. “We have been discussing it for years,” said Krone. “Now we have to be proactive, show the economic facts and back them up with figures.” BFH Wirtschaft did its part with the symposium.

Astrid Tomczak is a freelance journalist in Bern. Until March 2011, she was the editor in charge of UniPress, the science magazine of the University of Bern.