Konferenz: Healthcare of the Future – Bridging the Information Gap

How will eHealth, mobile health, self-monitoring and personalised medicine affect the future healthcare system? How can these technologies be better linked and thus avoid previous media discontinuities? What are the challenges and opportunities of the electronic patient dossier? BFH Technik & Informatik organised the first international conference “Healthcare of the Future” on these topics on 5 April 2019 in Biel. The focus was on the current status of developments in the field of medical informatics. Around 100 registered participants from Switzerland, Germany, Austria, England, France, the USA and Australia, as well as many students, were able to learn about the latest developments in numerous keynotes and presentations in two parallel tracks. The aim of the conference was to use the latest information technology to overcome the existing communication gaps and information losses between the various partners in the treatment process and thus to improve and speed up the process flows in the health care system. In addition, patients should be more empowered to take an active and decisive role in their own treatment process.

EPD does not solve all communication problems

The Mayor of Biel, Erich Fehr, welcomed those present with an exciting story about the development of bilingualism in the watchmaking city of Biel. He described Biel as “poor but sexy”. Two international speakers opened the morning and afternoon sessions with exciting keynotes: Hans-Ulrich Prokosch from the University of Erlangen, Germany, kicked things off under the title “Improving the patient-hospital relationship”. He pointed out how one-sided this relationship often still is today. It is true that the doctors in the hospital and other interest groups are very interested in the patient’s data for medical research purposes. However, the patients themselves are often not heard and it remains unclear what value they receive in return and what right they have to have a say. 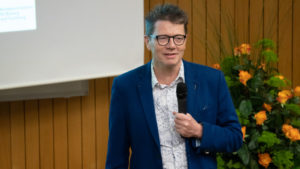 Somewhat exaggeratedly, Prokosch asked whether doctors want to communicate with their patients at all. The upcoming electronic patient dossier would not solve this problem. Rather, it is initially only a collection of static documents and cannot compensate for a lack of communication. Changes to this state of affairs require that the doctor not only takes note of the patient’s concerns digitally, but also takes them into account. Prokosch took up the cudgels that eHealth must go beyond the sharing and reuse of information from documents to a new culture of communication between doctors and patients that leads to shared decision-making. This has implications, for example, for the nature of consent to use data for research. In future, it must be possible to adapt this dynamically to the respective requirements. As a solution, Prokosch proposed a unified patient portal that comprehensively supports communication between patients and doctors in the context of health care and research. 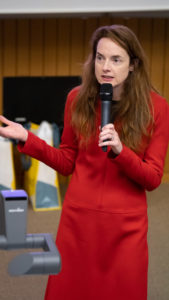 Margaret E. Morris from Seattle, USA, a clinical psychologist who had systematically researched the effects of IT-based applications on users as a Senior Research Scientist at Intel from 2002-2016, captivated the audience with her talk on “Left to Our Own Devices”. Starting with a report on the emotional effect of light as a sign of closeness and thinking of each other in IT applications, she next mentioned the example of a type I diabetic for whom such options of “information sharing” via mobile devices had negative effects instead. The permanent communication of well-being and sugar levels to a close family network led to an overabundance of comments and well-intentioned advice from the closest relatives. In this case, less communicativeness was ultimately better for both sides. With various questions, Morris was able to show the audience present interesting and absolutely comparable effects in other IT applications as well. As a final example, she showed the 3D visualisation of tumour spread in a patient. In her example, viewing this visualisation together helped the patient, her husband and her doctor to decide together on the best therapy options. The three sessions in the Scientific Track under the topics “How will eHealth change the future treatment process”, “Workflows in healthcare”, “Knowledge-based support”, as well as the two sessions in the Young Researcher Track under the titles “Apps to support patients and healthcare providers” and “eHealth and the informed patient” were well attended and there was lively discussion. 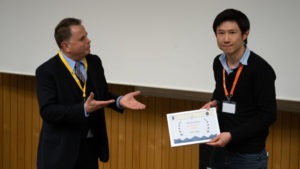 Finally, the “Brönnimann’s Award”, endowed with 1,000 Swiss francs each, was presented to William Hue from the University of Bath, UK, for his excellent contribution “Exploring the future role of own measurement data in rheumatology” and, in the Young Researchers section, to Gabriela Augustinov from the Medical University of Vienna for the equally excellent contribution “Can the Austrian national patient file support the recruitment of trial patients?”. This conference day ended with an aperitif and lively discussions until 8 pm. 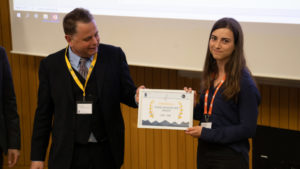