Public authorities make data available for secondary use as public sector information, (accessible) apps can use these and thus create added value. This paper focuses on requirements for the usability of a blind app for orientation in cities as well as requirements for the data. In addition to the widely used Points of Information, Points of Orientation and a supporting architecture are discussed, which are available for use as Open Government Data or in a crowd-based approach. Within the framework of a joint project, the implementation of a functional app using a sustainable data platform is planned. Public authorities collect, collate, produce and use data of all kinds, for example demographic, economic, geographical and meteorological data. This public sector information (PSI) can generate significant added value for services and products with the help of ICT. An OECD study (cf. 1) shows positive effects for economic, social and cultural areas of life, among others. In the meantime, portals for the provision of Open Government Data (OGD) have been established at various state and municipal levels (above all in the USA and the UK). There are numerous applications in the form of websites or apps. This article focuses on navigation systems for blind people and people with visual impairments. Corresponding GPS-based apps are widespread, for example myway (cf. 2) from the Swiss Association for the Blind or blindsquare.com. What these applications have in common is that they use information on points of interest (POI), for example from OpenStreetMap, and achieve great acceptance in combination with voice output and barrier-free operation. Crowd-sourcing approaches and the input of own POIs enable improved and individualised navigation. Improved orientation for the blind For the orientation of blind people, the usual standard (voice) output about intersections, junctions, etc. is not sufficient, as the surroundings cannot be perceived visually. Navigation systems for the blind offer additional information about the immediate surroundings, for example reading out routes to the next POI depending on the desired direction, the so-called turn-by-turn route guidance. In a comparison of five widely used iOS navigation apps (cf. 3), further functionalities are listed, including a “where am I?” function, a “route left” warning, a route recording and the possibility to create own POIs. Since the type and density of POIs depend on existing data sources, the quality of the orientation and navigation services varies. The additional use of OGD seems to be promising, since in cities, for example, information about fountains, guidelines, acoustic traffic lights, trees, surface conditions of footpaths, etc. is available and can be included in applications as points of orientation (POO). Olfactory data such as typical smells (of bakeries) or acoustic data can also contribute to orientation. At present, it is not sufficiently clear to what extent POIs and POOs in navigation systems are of actual benefit to blind people. Elicitation of requirements In cooperation with the Foundation for Accessibility, Access for All (Zurich), and the University of Applied Sciences of Eastern Switzerland (Rapperswil) with expertise in geoinformation systems, the BLUSON project (see info box) will investigate the requirements both for the barrier-free usability of an app for the blind for orientation in cities and for useful and necessary OGD data. A mobile application is to be developed to prove its usefulness, using OGD from the City of Zurich in close cooperation with the Open Data Group of the Office of Statistics. Conversely, in an iterative user-centred approach, requirements for data to be made available that offer added value in the given context are also to be identified. The results of these investigations, if accepted, will enable a lighthouse effect with regard to the opening of data in other cities and municipalities. Even more data through crowd-sourcing The widespread approach of crowd-sourcing even more data as Volunteered Geographic Information (VGI) (cf. 4) is also being evaluated and its integration prepared. However, the advantages of a possibly larger area coverage must be set against considerations of ensuring the coverage rate and data quality (cf. 5), so that areas of differing usability do not arise, as for example in OpenStreetMap. The aim is to ensure quality in the integration of VGI data through workflow processes. Typical CRM functionalities help to homogenise and manage data provided by different data suppliers. Homogenisation through a data platform The use of different data formats in different quality as well as the inclusion of VGI data and the regulation by workflow processes, as described above, suggest an encapsulation of the mechanisms necessary for this. With regard to the reusability of the approach for similar scenarios and applications, a data platform is planned, an AAGDP (Aggregated Accessibility Geo Data Platform), which mediates between the data sources and the application and thus represents a classic abstraction layer. Additional data sources can be added without changing the application, for example for other cities, through programming interfaces (API). 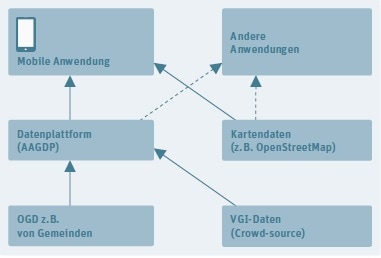 Figure 1 shows that, conversely, the AAGDP also allows other applications to use data without these applications having to worry about details of delivery, quality, etc. Status of the project and outlook Within the framework of a bachelor thesis (cf. 6), possibilities for integrating POO with OGD of the city of Zurich were tested. A web application was developed as a proof of concept, which met with lively interest at several project presentations. For practical use, however, many questions remained unanswered, both about the accessible design of the application and about the considerations mentioned in the article about a supporting data platform. The results of the BLUSON project should make a positive contribution to a politically desired inclusive society. Independent mobility is an essential prerequisite for a self-determined life and better quality of life, especially for people with disabilities. The results also serve to improve social interaction and thus harbour an added public value. The system architecture is not specifically designed for the application scenario described in this paper. Therefore, the project results can also be transferred to applications for other user groups, for example those for wheelchair users or for families looking for family-friendly routes in cities.

BLUSON – a project acronym for “Blind Users’ System for Orientation and Navigation” The project idea was developed with the partner of the completed EU project TAO (thirdageonline.eu), the Foundation Access for All (ZfA) (Zurich), which has design and analysis expertise in the field of accessibility. Prof. Stefan Keller from the Geometa Lab at the HSR University of Applied Sciences Rapperswil was found as an implementation partner. Based on its experience with blind and visually impaired people, ZfA has identified their need for improved orientation and navigation in cities as a priority. Under the direction of the E-Government Institute, a solid methodology for requirements elicitation is being developed for this project. A project application has been submitted to the Hasler Foundation for further funding.

Eduard Klein is a lecturer in the Institute "Public Sector Transformation" of the BFH Department of Economics. He teaches and researches in the field of business informatics, especially about web technologies and software engineering. For more than 10 years he has been involved in major EU projects, most recently in the area of Smart City Innovation. In addition, he develops and supervises cooperations with foreign partner universities in the Bachelor's degree program in Business Informatics.