A small group of artists in 1916 performed for several months at the Cabaret Voltaire in Zurich, the birthplace of dadaism. DADA stands for experiments to absurdly reduce tried concepts and values and pioneered tactics of remix, collage, sharing and deconstructing works. This radical democratization of art still today drives internet, DIY, open source and remix culture. In 2016 DADA turned 100 and is still very much alive.

In 2016 Dada was celebrated extensively in Zurich and around the world. Exhibitions took place at the Landesmuseum and Kunsthaus Zurich in Switzerland. As part of those celebrations, Dock18 began Re:Dada together with swissnex San Francisco. Supported by Migros Kulturprozent, swissnex San Francisco and Pro Helvetia, Re:Dada was a smaller project of the larger initiative of dock18: re:publicdomain, where Mario Purkathofer and Daniel Boos together with artists explored how to re:discover, re:read and re:write works that had recently joined the public domain. Re:Publicdomain seeks to challenge the rather classical approach of many institutions to mainly show and discuss art behind protective glass in museums, use passive art historical discourse and present works in books. Re:PublicDomains believes that only by re:using art with contemporary artistic approaches, can we keep our cultural heritage alive, rediscover it and keep it relevant.

A century of Dada means that many works are now in the public domain (e.g. Hugo Ball, Sophie Taeuber-Arp, Elsa Freytag von Loringhofen & Johannes Theodor Baargeld). The copyright has expired and many dada works now belong to everybody, and can be reused in any creative way. Therefore Dada is a great field to explore the re-use of public domain material.
This article describes the journey of the project re:dada which started with collecting works and talking with museums and former rights owners to presenting the works through performance and exhibition.

Re:Preparation
Dock 18’s re:publicdomain projects begin with a search of available works in the public domain. To identify the dadaists and their works we initiated a call and asked experts, such as Juri Steiner, Raimund Meier, Adrian Notz to share their favorite Dada works. Out of this list we ‘randomly’ selected 22 works and gathered the digital versions of the work. Some were already available on archive.org, wikipedia, gutenberg or archives of museums.

Many originals of the early dada period are in archives, libraries and museums in Switzerland and not yet digitized or available for downloads. Gaining these works involved discussions with archives and sometimes lead to discourse amongst high level management within museums. The Kunsthaus for example had to discuss our request for 24 digitized works with their board as it was not just a request for publication but re-use. Also we had to pay for the digital versions which are now, after the request, also available on the Kunsthaus website. Our request for the opening manifesto from Hugo Ball triggered an internal discussion with the National Library of Switzerland. Their department “Schweizerisches Literaturarchiv” was hesitant to provide us with a digital version and wanted to know more about how we use the works, begging us to use the work respectfully. This brought to the surface the question of what it means to be a work in the public domain, free from restrictions. Copyright laws differ between the US and Switzerland. For example early works of Hans Arp or the picture of the fountain by Alfred Stieglitz are in the public domain in the US, but not in Switzerland. For the exhibition we focused on the US law and the concept of fair use.

After having collected the digital artifacts, we contacted artists whose artistic approach was suited to Dada remixing and worked together (Switzerland and US) via group and individual calls and meetings.

Re:Performing
Dada is always tied to performance and therefore we also did several performances as part of our re:dada project. We started with a small dada soirée at the Cabaret Voltaire in Zurich on April 17. The November 4th Re:dada exhibition opening at swissnex San Francisco had over 300 guests and consisted of live performances, improvisations and short video clips around Dada much like the original dada soirées. The audience was also involved and encouraged to participate. Some of these performances were presented both in Zurich and in San Francisco and were built on previous Dada works, here are some details:

The audio-visual performance Randensonate by the artist duo W3rkH0f media arts remixed the stop motion animation short Diagonal-Symphonie by Viking Eggeling. W3rkH0f also used digital photos of various original Dada magazine pages inserted in realtime video collage. The sung lyrics of Randensonate consisted of modern acronyms (of politics, economics, technology) and names of fruits and vegetables (including beets). This combination of audio and image input was then combined into a live Dada video and sound collage creating a live Re:Mixing of these ingredients, using their own custom developed software tools.

At Re:staurant Dada, dadaistic meals were prepared for the guests by Adolf Gurkenhofer. The menu was inspired by Man Ray’s Menu for a Dadaist and Duchamp’s Steak Tartare. The main attraction was the soup filled with the letters of Hugo Ball’s Opening Manifesto. A laser cut cut-out of the manifesto was made from hand made pasta consumed by the audience.The overall restaurant itself was a collage of words, letters, manifestos, kitchen tools, art objects, found objects, dishes, plates and ideas around Dada. The accompanying music during the cooking was provided by the circuit bending orchestra, created by the Swiss artist flipfloater who builds new music instruments out of used electronic toys and included The dadaistic piece “Fünf Pittoresken” by Erwin Schulhoff. 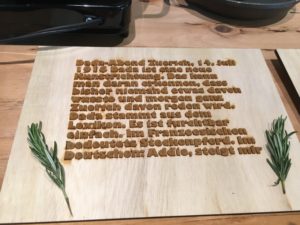 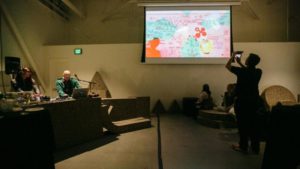 Re:Exhibiting
The exhibition Re:Dada was presented in the swissnex Gallery from November 4 – 30, 2016. In total there were 13 artists or artist groups represented and 5 public events throughout the month connected to the larger Bay Area Dada World Fair celebration.

Some highlights from the exhibition included
Karawane Market by curator Daniel Boos and the Karawane Community. Using a crowdsourcing platform, people were asked to record video testimonials for products and services they could sell via the sound poem Karawane by Hugo Ball, which was first performed at Cabaret Voltaire in 1916. This curated collection of videos presented in a stack of monitors invited visitors to put headphones on to hear and watch the submitted videos from around the world in a variety of formats–a kind of Dada world market.

Sophie Cordova’s NEGERLIEDER : “He pleads for an intensification of rhythm (Negro Rhythm)” was a photographic tryptic where the artist herself critics the Dadaist approach of mining other cultures via questionable appropriation. Riffing on Man Ray’s photographs of women posing in African masks, the works look to underline the movement’s philosophical correlation between what Hugo Ball famously deemed “fool’s play sprung from nothing” and otherness. Jenny Odell’s interpretation of Marcel Duchamp’s famous Fountain, taught in every Art History Modernism class in America, similarly took a female position placing a single, signed GoGirl™ female urination device inside a vitrine.

Tom Commita remixed Georg Scholz’s painting “Industrial Farmers,” replicating its visual composition, but replacing its characters, props and scenery with those of tech hippie culture. Instead of a German priest and his wife, there is a mid-twenties San Francisco tech couple. And in place of the Bible, the techie holds Jack Kerouac’s On the Road. The military bust in the anterior is replaced by a bust of Steve Jobs. And out the window is not a machine and a man, but a recreation of an actual Burning Man sculpture around which a 3D model dances on a loop, turning Scholz’s work into a quintessential San Francisco scene. 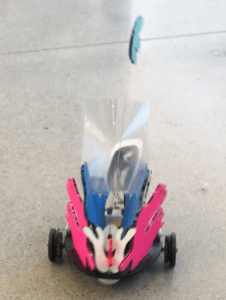 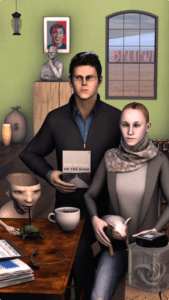 Do great things by Tom Comitta

Re:Conclusion and Learning
While many 100 year dada celebrations, events and exhibitions put an emphasis on discussing, explaining or showing dada, we fostered the re-use of dada. This lead to a discussion about what it means to remix dada works in the public domain and what the potential strategies are. Artists explored how dada could be appropriated with digital tools, modernised or how to comment on them. The following three cultural strategies were used to reuse and reread the historic content.

First many artists mainly switched the medium, namely from a painting to a digital animation and video (eg. Do great things), from text to food (Re:staurant) or from a static video to a dynamic live performance (Randensonate).

Secondly our invited artists found that the political and cultural intentions of the Dada artists are still relevant today. Next to Tom Comitta’s “Do great things” the grandson of John Heartfield re-mixed a collage of John Heartfield and replaced the political actor Mussolini with Donald Trump. Cho Linska built robots out of the works of Jean Arp to attract a new generation of investors and meet the expectations of younger and geeky collectors.

Thirdly, artists criticised some notions of the dadaist. Where Duchamp focussed on the male object pissoir, Jenny O’dell showed a female urination device while Sophie Cordova critically reflected on the fascination of dadaists with African objects and from her view questionable appropriation.

As the public domain grows with new dada works entering the public domain every year, for example Emmy Hennings and Karl Schwitter’s in 2019, Libraries and archives must continue to make these works available for re-reading and re-writing to keep them alive.

Wir nutzen auch verschiedene externe Dienste wie Google Webfonts, Google Maps und externe Videoanbieter. Since these providers may collect personal data like your IP address we allow you to block them here. Please be aware that this might heavily reduce the functionality and appearance of our site. Changes will take effect once you reload the page.